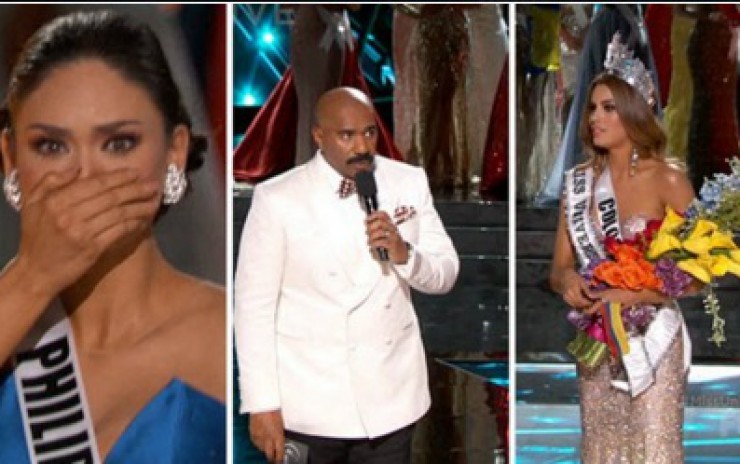 Comedian and television personality, Steve Harvey made the verbal blunder that is resonating around the world while hosting the Miss Universe pageant when he announced the wrong winner. Harvey in announcing the winner of the contest announced that Miss Colombia, Ariadna Gutierrez Arevalo was the winner only moments later to announce that she was first runner up and Miss Philippines, Pia Alonzo Wurzbach was the actual winner. Compounding the blunder was the fact that Arevalo had already been crowned and had to suffer the indignity of having the crown removed. Social media and traditional media exploded. Conspiracy theories surfaced that it was all a plot to attract attention to the Miss Universe pageant.

Harvey admitted that it was his mistake, calling it a human error and apologized to both contestants which is the proper response in any crisis. He then took to Twitter to apologize again only to misspell both Colombia and Philippines. This created yet another controversy. So great was the gaffe, that Justin Bieber took to Twitter to mock Harvey. With this falling on the start of the slow Christmas news week it is guaranteed to dominate social media and the news for the next few days.

So what should both Harvey and the Miss Universe pageant do in terms of crisis communications?

For Harvey, I would recommend the following strategy:

What should the Miss Universe Pageant do?

The one true winner from this gaffe has been Miss Colombia, Ariadna Gutierrez Arevalo who has handled the situation with class and tact, applauding the winner and congratulating her and not criticizing anyone. She has been a lesson in grace under pressure.

The Miss Universe Pageant is being talked about more as a result of this then it has been in the past several years. How it and Harvey respond to this crisis will determine do they emerge as true winners or the butt of late night comedians’ jokes for weeks and indeed years.